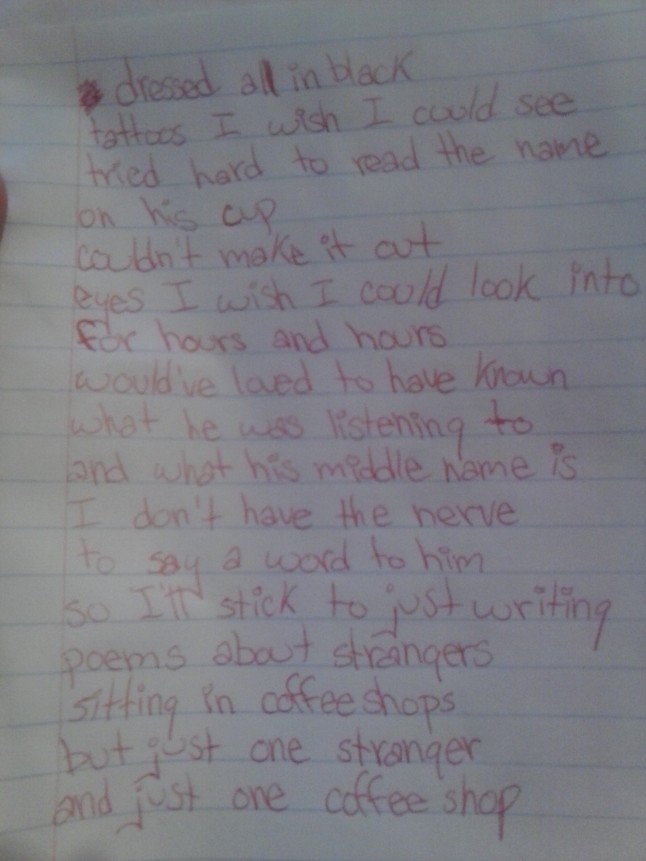 I got behind on these just a few days after I started them, so I’m just writing the posts whenever I feel inspired to write them (or as was the case with Day 9, pushing thru the ones I don’t feel that excited about so that I can get to the ones that actually sound interesting, like Day 10). The task for Day 10 was to let the scene be the inspiration, in a way to let the setting become the story. I was at Starbucks this morning and decided I wanted to do this task. I was going to take notes and then write a piece based on my notes, but I actually think my notes are written well enough that they are the meat of the post already. So here goes:

DEP Starbucks 11:34 AM 073016
A pair interacts across the diagonal in front of me. A man and a woman. The woman is a bit strange and honestly a little rude. There’s an older well-dressed woman eating a pastry and squinting at a smart-phone. Another older woman wearing a pretty red blouse and blue nails that look young, but not out of place on her. She’s having a close conversation with a younger woman. It looks serious, but not sad or tense. The younger woman has glasses and pretty hair pulled back. Against the wall, another older woman. She’s using a laptop. Glasses and nice hair, silver mixed with native dark brown or black. She might be Native American or perhaps Pacific Islander, I’m not good at uncovering roots. A middle-aged dark man, can’t tell quite what he’s doing, but he’s slouched and doesn’t look happy. Another pair in the middle of the room. I can’t glean many details about them because of the distance. They are actively engaged in conversation, but not overly lively. A young man on a computer further down, perhaps watching a movie. An employee, petite and pretty, sweeps the floor with an ugly yellow broom. Employees behind the counter, I can’t see them, but I can hear as they talk light and friendly to each other between customers. Two Hispanic men out on the porch, they’ve got bags with them, maybe homeless, but maybe not. Out the window, an older model car, dark red Mercury, dirty and waiting in the drive-thru. I’m sitting in the corner, just letting it all exist around me. Plaid dress, cuffed jeans, pink shoes. 11:54 AM

I did something ridiculous today. I wrote a note to a stranger. I signed my name of course, but just my first. Chances are he and I will never cross paths again. But it was one of those moments, a moment where there were no rules and no plan, just something that resembled a cheesy movie scene (the scenes I love so much). Recalling the whole story is more than I wanna do here, so here’s the short version: I was at a coffee shop, an attractive man sat near me, after asking very politely if it was okay to do so, then once the place became less crowded, he announced that he was going to go sit on the other side of the place and thanked me for letting him sit by me, someone else took his seat later, this other guy tried to talk to me a couple times, but I just didn’t want to talk to him, he was the sort of person who talks to everyone, I’m not that sort of person. I jotted down a short note to the guy who had moved seats. I can’t recall it word for word, but it went something like “The guy who sat in your vacated seat has tried to talk to me twice. I’m not the sort of person who talks to strangers in coffee shops. But I wanted to talk to you. You seem to be magnetic to me. That’s rare. But alas, I am on my way somewhere else. But if our paths every cross again, my name is —-. Have a nice day.” As I left the coffee shop, I set it on his table near his coffee mug and said “It’s not my number, I promise.” And he said something like “Oh okay, have a nice day”. And I left, smiling as I walked to my next destination, realizing how ridiculous what I had just done really was. Sometime life requires that we be outrageous. In moments like this I realize I am so strange, but beautiful in my own way. I am the girl who once acted out a scene from the Notebook with a gorgeous young man in a city that was too big for us, in a world that would watch us fail. I am the girl who used to believe that grand gestures were the only proof that true love exists. I am the girl who learned that the grandest gesture would also be the one that would rip my heart out. I am the woman who was once that girl. I am the woman who passed a ridiculous note to a stranger in a coffee shop. I am the woman who believes our lives should be a little bit outrageous sometimes.